The following story also appears in my short story collection, An Optimist’s Journal of the End of Days and Other Stories, published via Venetian Spider Press. 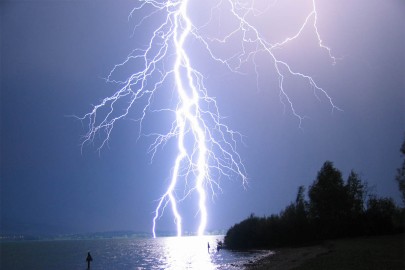 The blue dress uniforms co-opted from the Navy were itchy. The sailors imprisoned within them were tired and hot and couldn’t wait for the ceremony to be over. The captain looked across the water at the setting sun. At least this would soon be over, and they’d get some respite from this day’s infernal heat. But yet…

He looked down into the cool depths of the ocean waters surrounding the metal monstrosity he had called his home for the better part of three years. The setting sun glowed gold and orange upon the waves. He shuddered.

“And do you, Mark Wallace, take this mermaid, Jasmine Petals, to be your lawfully wedded wife? In sickness and in health… forever and ever, by Neptune’s salty bits?”

The young sailor looked down at the mermaid clinging to the ship’s side, gulped, and nodded his head. The red-haired beauty in the crystal blue waters smiled in approval, exposing sharp incisors in her delicate, full-lipped mouth.

“By the eternal laws of the sea, by Neptune’s trident and Amphitrite’s coral crown,  I now pronounce you mer-man and mer-wife. The bride may now—”

With a stupendous leap, the new bride pulled her husband over the edge of the warship, dragging him along with her as she splashed into the waters below. Soon, not even the emerald green of her tail could be seen as she brought the new merman to her lair in the deep, dark waters.

The men and women shook their heads in wonder. There was a reason humans steered clear of Neptune’s children. The mermaid’s kiss might cure their fellow sailor’s cancer, but the cure might just be worse than the disease.

Captain Deadly allowed himself a rare sigh of pity for his former crewman before ordering his crew to hoist the Jolly Roger. Fresh plunder lay ahead, and he might need the gold. Who knew? In his own future, he might need to hire an oncologist.

*originally inspired by a photo prompt from Six Minute Story, but has since been edited and extended. You can find the original here.

**I wrote this today, so I didn’t have time to let it simmer as much as I like before posting. Please be kind. Polite feedback is always welcome and appreciated.