As everyone who has read my blog knows (you two know who you are), Ohio has a wealth of support for the literary community, both for authors and readers and those of us who are both. After all, you can’t write if you don’t read. To illustrate this point, the South Euclid-Lyndhurst branch of the Cuyahoga library recently hosted the Western Reserve Writers’ Conference, yet another free conference for the wordsmiths of Northeastern Ohio. Though I cannot possibly capture all the energy and inspiration of the entire conference, I will do my best to give you the highlights of what I learned there.

Another writer that I met at a previous conference, John Ettorre, gave the keynote speech. He spoke about the importance of mentors, with a special focus on his own mentor, William Zinsser. Zinsser’s well-known book, On Writing Well, is a must have for any writer. His tips hold true whether you are writing fiction or nonfiction, novels or newspaper articles.

One of the key points I took away from his speech was Don’t be afraid to contact your heroes. After all, what do you have to lose? Though Zinsser was very well known and respected, he always made time to help other writers with the craft and viewed it as a sacred duty. I think this also touches upon one of the main reasons that writers’ conferences are so important: you meet other writers. And while he also pointed out that your writing is your own, meaning you should use your own voice and not simply emulate others, it is important to have that sense of community in what is often a lonely occupation. I know that when I’ve collaborated in the past, I’ve always felt I got more out of the experience than if I had written by myself. Bouncing ideas off others, getting inspired, and boosting your own abilities is why writers congregate on- and off-line, at conferences and workshops, libraries and bookstores and their own homes. We seek out our heroes as well as our peers.

Some of his other points were more practical and applicable. Change is a tonic, so don’t be afraid to do something different and break out of your comfort zone. Write about something you care about, so the audience cares about it too–you learn from the act of instructing others. Becoming successful takes time, but don’t use that as an excuse to not learn your craft. And lastly, writing is a voyage of discovery. This last one struck me as especially true; I often find out things about myself and the world around me through the stories I write.

The first workshop I attended, Organizing Your Novel, was conducted by the prolific author, Julie Anne Lindsey. She gave a lot of tried and true writing advice: be an avid reader, research the content of your book, know your craft, and show rather than tell. She also reiterated the importance of writers’ groups and gave several examples of how they had helped her personally.

While it’s always helpful to be reminded of these truisms, I found her more specific advice to be more interesting. She outlined specific formulas to create tension and keep the reader’s’ interest. Near the end of the session, she answered questions. Someone asked her about writing through emotional conflict, and she said that it might actually make for a better story. Writing can be therapeutic, and you can improve your story by harnessing those emotions and putting them onto the page. We finished up with a writing prompt to outline a story, which resulted in my premise for this year’s National Novel Writing Month.

I was really looking forward to the next workshop, About Contracts & Copyright Issues, conducted by attorney Steve Grant. While he covered a wealth of legal information, the two things I found most helpful were also the simplest: one, a writer’s biggest mistake regarding copyright is not actually writing anything; two, while most of the time people can be sued for just about anything, usually only successful authors are sued over their work.

Unfortunately, there is a third thing I learned unintentionally during this workshop. I use technology heavily during events such as this, as they are handy for taking notes. And while I also use low-tech solutions like pen and paper, most of the time it’s just easier to use the electronic tools available through my phone and tablet. However, this time he was giving so much information so quickly, I decided to download a recording app so I could type my notes out more efficiently later. I did it on the fly, without doing research ahead of time, and I’m embarrassed to say that I lost all the recordings that I took of Mr. Grant’s talk. So, benefit from my mistake, and make sure that when using technology you haven’t used before, that you research and test it first. 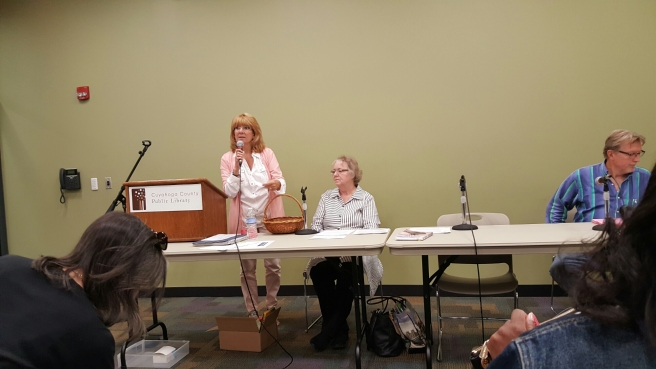 There was about an hour for lunch, which was great for meeting and greeting other writers. Afterwards, there was a Question & Answer panel on The Writing Life. Three of the conferences authors gave talks and advice about being a writer.

Steve FitzGerald, writing coach and ghost writer, spoke about writing retreats and named specific ones for those of us lucky enough to live in Ohio. And while I agree with everything he said in theory, I am unable to verify it personally since I have neither the time nor money to attend them. However, if you are able to participate in a writing retreat, I would love to hear about your experience.

Diane Taylor, a longtime writing coach and editor, discussed the importance of writers’ groups. She spoke about the value of connecting with other writers, as I’ve mentioned earlier in this same post. She gave several examples of groups to join, such as Romance Writers of America, Sisters in Crime, Literary Cleveland (which hosts INKubator and the monthly poetry workshops I attend), and Skyline Writers.

Deanna Adams, the conference organizer and a well-known local author, gave tips for perfecting the first pages of a manuscript, and she was also kind enough to give me permission to share those tips with you.

Top 10 tips for Perfecting a Manuscript

The last workshop I attended was, How NOT to Write for Free, given by Sandra Gurvis, a freelance writer and author of  Confessions of a Crazy Cat Lady and Other Possibly Demented Meanderings. I have been interested in freelancing for awhile, though I have yet to publish my first novel. The class focused mostly on ensuring payment from your clients once you’ve established yourself as a freelancer, but she addressed other points.

She emphasized taking whatever writing jobs are available, as well as doing anything possible to build a better resume’ and client list. As an example, she explained she became certified by the American Medical Writers Association to expand her job qualifications. Other examples of paid work are content provision such as articles for magazines and associations, editing and evaluating books, and writing newsletters and website posts. While she conceded some writers work for exposure instead of money, the session focused on paid work.

During the question and answer session, I asked her about starting out as a freelancer, especially concerning taxes and acquiring work. She spoke about having an accountant to do taxes every three months and using a W9 form for an independent contractor. As far as finding work, she recommended websites, especially ones that verified whether or not clients paid their bills: Upwork, Guru, Linked In, Association of Ghost Writers (associate membership), and Skyword.

There was, of course, much more to the conference than just the highlights I’ve outlined above, much more than could possibly fit into a single post. If you have a writers’ conference or group in your area, I highly suggest you attend. If not, there’s always NaNoWriMo next month, which is a massive online writing experience; there’s tons of camaraderie and support to be had both online and off. Thanks once again to Deanna Adams, John Ettorre, and everyone else who contributed to making the conference such a wonderful experience.

*photos were taken with my phone at the conference

**permission for summations and photo use kindly given by Deanna Adams, John Ettorre, and Sandra Gurvis.